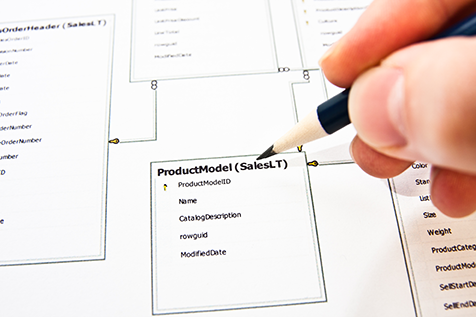 What is something you have seen done repeatedly in database design work done by others people which you find to be particularly annoying or detrimental?

Christian Koch, Berlin, Germany:
I do not like absolute individual code ... I try to use generalized and standardizised functions as often as possible.
I like the data clearly represented ... so I often use subforms (1 to many relations).

Mark Horner, Bristol, England:
Poor UI layout for the end user and not splitting the database when there is more than one user. Splitting the database involves having a seperate front end (i.e the application your staff will use) and a back-end which effectively acts as the 'database server' holding all the information in the tables, which the front-end links to. If you don't split the database with multiple users it's only a matter of time until corruption kicks in when someone's network drops or their PC crashes and takes a significant of time to re-build for something which is completely avoidable!!
Another small gripe is in VBA code when people don't use boolean triggers for true or false they use a string such as "correct" or "false" which uses more memory than a boolean statement, it's not a massive drag on performance but it is a small gripe!

Ven Grollmus, George Town, Tasmania, Australia:
I have found the lack of naming conventions and poor normalisation of tables very detrimental to systems, as this makes it hard for new support staff to come in and support an application and to find issues when something isn't quite working as expected.

Bruce Bray, Phoenix, Arizona:
The most annoying part about coding in VBA is when you trap an error, and the error returned by Microsoft is erroneous. I have had this happen on numerous occasions in the past couple of decades.

Temitayo Ilori, Berea, Ohio:
A lot of people create database that has anomaly (insertion anomaly, deletion anomaly and modification anomaly). This will create a huge problems when working with the data. Some other databases don't conform to one or more of the first normal form, second normal form, third normal form and the Boyce Codd normal form. These end up being inefficient.
The solution to this is to test the database design for all of the above-stated normal forms. If there is a violation of any of them, the error should be fixed before the data is added to the tables.
Some people don't consider the attributes of the data when creating tables - this include the cardinality and optionality. If this is not considered when creating tables, there will be problems with linking tables. The same thing also happens when there is not unique identifier (key) for each table.
One other thing that can help prevent error is to first create an Entity-Relationship Diagram before creating tables. This will help guide with the database design. If you want this, I can do it with Oracle (I have access to Oracle 11g).

Julie Hogue, Akron, Ohio:
The main design flaw I find when modifying another programmer's work is the repetitive use of VBA logic within multiple forms or reports. If I have a piece of logic that is used in multiple areas of the system, I set up the logic one time as a function and then call the function from the various areas that utilize this piece of code. By doing this, I have a single source of logic to modify in the future instead of modifying 10 identical pieces of code.

Biju John, Pathanamthitta Dist., Kerala, India:
* use field name that never used
* Use of complex field name and field type that are heavy for db to process
* Do not use RDMBS model
* Use unnecessary indexes`
* No documentary
* Enhancement may be expensive as it affect the existing functions

Grace Elaiza Seballos, Davao City, Philippines:
I do not know. The reason is, I do not look at anyone else's work. I mind my own business. The only competitor I have is myself. I have developed my own architecture since 2005, and have been improving it year by year. If your are going to ask my about MS Access, I have experience with MS Access. And I have stopped using MS Access for a production environment. What I have been doing was upgrading people from using MS Access. It is not an RDBMS. It is not meant for heavy transaction usage. If it was, Microsoft will not invent MS SQL Server. Some experts will try to find a work around. I say, that is a waste of time. Why reinvent the wheel?

Artiben prashantbhai S., Bhavnagar, India:
Use of general names given to text boxes and command buttons such as text1, command1 etc.
Also use of docmd.domenuitem like old VBA code.